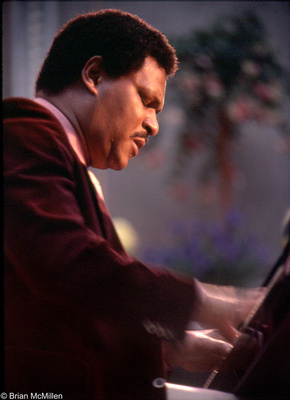 …..It must have been the late 1980s when my girlfriend and I put on our best clothes and shelled out more money than we had to hear McCoy Tyner at the very elegant Dimitriou’s Jazz Alley in downtown Seattle. Dimitriou’s was only a few blocks from my tiny apartment in the shabby Belltown warehouse district, but it was a world away from the dive clubs our rock band played in. We were clearly out of our element. But we knew enough to know we had to hear the man who created the open-ended and thundering chordal ambiance that gave Coltrane the rhythm and the room he needed to go anywhere in the sonic time-space continuum. To us, it was a rare privilege to hear this man live.

…..Somehow, McCoy sensed our hungry appreciation. We were lucky to sit just a few feet from the stage, and several times he looked at our young smiling faces. When the break came, there was an empty booth next to ours. McCoy ambled over with his drink, sat down, turned to us, and started talking as if he had known us for years. He asked who we were and what we did. We told him we were musicians who wrote and played our own rock songs in local clubs. We told him about the local underground music scene, that unknown to us, in just a few short years would produce some of the biggest names in modern rock. But at that time, it was just friends playing for friends in tiny bars. “That’s cool,” he said, and that was all it took for him to accept us and our amateur exuberance as part of the great aural tradition, a tradition his playing had transformed. For us, it was an honor.  After that, I don’t remember much, it was just small talk among new friends. Finally, he set down his drink, gave us a smile and said, “Back to work.”

…..When McCoy died on March 6th, I remembered that night decades ago, his friendly smile, his right hand coloring the melody like a songbird, while that famous left hand of his hovered high above the keys, like a hawk ready to attack.