“Pressed for All Time,” Vol. 1 — Creed Taylor on Lambert, Hendricks, and Ross’ Sing a Song of Basie

In this edition,  Jarrett interviews producer Creed Taylor about how he came to use tape overdubs during the 1957 Lambert, Hendricks, and Ross Sing a Song of Basie recording session 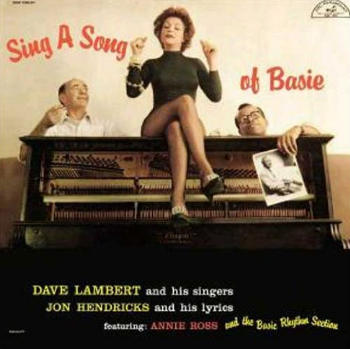 CT.  When I was growing up buying and listening to records on Blue Note and Prestige, there were sometimes great moments and sometimes long periods of waning interest:  bass solos too long, unnecessary drum solos, and an improper use of space.  Miles, you recall, always talked about space.  When I got out of school – I went to Duke University – I thought the first place I was going to hit was New York City and Birdland and, somehow, I didn’t know how, jump into recording jazz:  make some records I’d like to listen to.  If I liked what was coming out, I felt other people would also.

…..I started at Bethlehem Records, and after I’d been with them two years, I called Sam Clark, the head of ABC-Paramount, and told him I’d like to come over and make some jazz records.  They’d just formed the record company.  It was as simple as that; they hadn’t done anything.  I moved there in 1956.  Down the hall from me was Don Costa, who was doing Paul Anka, Steve and Eydie, and Ray Charles.  Actually, I borrowed Ray Charles from Don Costa when I started Impulse at ABC in 1960.

MJ .So your career began with magnetic tape already in studios.  How did you learn to work with that medium?

…..I’d say it was intuitive.  I walked into tape.  I never dealt with anything else.  Tape was 15 ips [inches per second] and single-track.  Actually, I produced Sing a Song of Basie with something like thirty overdubs on one track – an Ampex machine with ¼-inch tape – complete with all the hiss I could possibly accumulate.

…..It’s very simple to explain.  Probably, if you talk to Jon [Hendricks], he’d have a different story.  If Dave [Lambert] were still around, he’d have a different story.  But really what happened was Dave Lambert was somewhat of a vocal contractor.  He made a living in the studio with either jingle singers, or doing his scat thing with jazz bands.

…..He brought in a group of singers, and we tried to get them to swing, and they did not swing by any stretch of the imagination.  I talked to Annie [Ross], Jon, and Dave.  I said, “We’ve got this tape here.  You guys have the concept.  You know how to phrase like a trombone section, and Annie knows how to phrase like a trumpet section.  She can do the shakes that the Basie trumpet section did, and all that kind of stuff.”  Jon was the tenor soloist, or whatever instrument happened to be doing the solo that he’d scat.

…..Then it started coming together.  We laid down the basic rhythm track with Basie’s rhythm section at that time, and started adding vocals:  Annie’s lead trumpet, then she would do the second trumpet, third trumpet, and fourth trumpet.  We just built it, and with no regard of any kind to hiss in the audio, because we were creating something that made sense.  The other concept, using studio singers, they might as well have been poor man’s Swingle Singers or something.  It did not work.  With Dave, Jon, and Annie, it developed by itself and sheer determination on our parts.

Listen to “Everyday” from Sing a Song of Basie One comments on ““Pressed for All Time,” Vol. 1 — Creed Taylor on Lambert, Hendricks, and Ross’ Sing a Song of Basie”