“The Launch” — a short story by Amy Tagle

“The Launch,” a story by Amy Tagle, was a finalist in our recently concluded 47th Short Fiction Contest.  It is published with the permission of the author.

I look up from my sight-reading piece, certain I had correctly executed all of the rhythms and notes, all of the articulations and embellishments. My questioning eyes found a passionate face, lined with wrinkles that were now quivering in angst.

“I don’t care if you play a couple wrong notes here and there, but to play it so flat like that… so dull… that is inexcusable.”

I started again, trying to sense the life behind the ink, and I felt like the blind fool who says “I see” to his deaf daughter over the disconnected phone line. Somewhere around measure three it happened — a flash of a vision — I felt the impression of a budding flower and the warmth of the sun bursting through the clouds. All of a sudden, I went beyond the mechanics of which pinkies to use, for it was no longer my brain engaging with the music, but my very soul.

In truth, it was a rather withered phrase, no Benny Goodman solo; that is certain. When I completed it, Mr. Lenny leaned back, relieved, and he sighed, “I knew you had it in you.” It was almost as if he would’ve fired me on the spot if I didn’t have it in me. Or, whatever the word is when you quit your student, who happens to be paying you $40 an hour. No more was said, and we continued on, learning etudes and orchestral excerpts to prepare for my college auditions.

I went about my routine, playing the fight song for the Tigers at pep rallies and furiously rushing to complete some ridiculous essay questions on transcendentalism. Really, Thoreau? I couldn’t wait to get my “I survived Mr. Thompson’s AP English class” t-shirt.

Despite all the busyness of saving my reed yet again from our punch-drunk mascot and composing my bequeathals for the band banquet, my mind kept returning to what Mr. Lenny said. I had “it”, but I did not know how to access it again or why it only showed itself on certain occasions.

I felt “it” when our high school chorale performed the haunting lyrics of Black is the Colour of my True Love’s Hair. (Yes, I was that nerd that was in band and choir.)

I felt “it” when I heard Jasper improvise wild figures during Jazz class, but I didn’t think that counted, since I was not the one performing.

Frustrated, I put the problem aside and focused on my auditions for music schools across the state. I felt like I was auctioning myself off to the highest bidder. Far from the promise of the hoped-for scholarships, I was met with dismal responses: “You’ll probably make it, but you’ll be at the bottom of the section,” or, my personal favorite, “You can leave now.”

I was starting to panic. My family could not afford to send me to college without a scholarship! Maybe my pre-calculus teacher from junior year was right; she nearly had a conniption when I told her I wasn’t going to take a math class during my senior year. “What are you DOING with your life?!” she practically sobbed, kneeling by my desk. I remember staring at her, totally confident in my response, laughing internally at this crazy lady. I declared, “I’m doing music!”

Who was the crazy lady now?

Everything was falling apart. Even prom was a disaster. I had the perfect date, but I totally froze up on the dance floor. I just kept saying, “I don’t know the steps to this one.” I even said that when the Macarena came on. EVERYONE knows the steps to the Macarena. There aren’t even really steps. I could conduct a 250 piece marching band, but I could not get my arms to move to the sounds of Los del Río.

My date eventually floated away in the crowd of dancers, and I made my escape past the ice sculptures and into the ironically warm night.

The band banquet was scheduled for a couple weeks later. It was always my favorite event of the year, but this one was the night before my last college audition. Between the pressure building from trying to find a place to go to school and the anxiety I felt from the prom disaster, I told my best friend Katie I wouldn’t go. She looked up from her phone, her thumbs of thunder pausing mid-text. Her eyes narrowed as she quipped, “I’ll pick you up at 7.” Apparently, she was deaf to my protests and vehement denials, because she showed up at my door precisely at 7. I opened the door, revealing myself in jeans, a T-shirt, and converse shoes.

She grabbed my hand and pulled me to my room where she threw random dresses and jewelry at me. I finally gave in. My only stipulation was that I would NOT, under any circumstances, dance, and that I was going to keep the same shoes. I had to cling to my victories, however small.

As I left my room, my gaze lingered on my half-assembled clarinet, which would now receive no practice for tomorrow’s audition. Oh well. I guess I could always work for my uncle, making money by selling people instruments instead of playing one myself.

The banquet was amazing… up until the dancing. My toes danced inside my high tops, itching to get out there, but something kept me rooted to the table. That is, until I was approached by Lance.

His fingers tapped out some complex rhythm on the table in front of me as he asked me to dance. I saw the muscles of his forearms twitch to the beat. I had never noticed his forearms before. Not that I would have. Friends don’t let friends date drummers.

Yet this wasn’t a date. It was a dance. Before I knew it, I was gliding across the floor, being led by the insanely cool and cute drumline captain. We got through the Cha Cha slide and a cumbia, but then a song came on with a soaring melody and syncopated beat I had never heard before. I started to head back to the table, but found my path blocked by Lance, who had already found a way to move to this particular groove. I started to say the same line from the dreaded prom night, and he cut me off.

“Look, you will be fine. Just stop worrying so much. Let go of trying to be right all the time. Feel the music flowing with your body.”

I heard his words, but still felt immobilized. I thought back to Mr. Lenny’s words, and how he also had chastened me for being flawless. I closed my eyes and tried to feel anything flowing through me except anxiety. I felt Lance put his hand on my shoulder encouragingly. Wasn’t I supposed to try my best? What was wrong with doing things correctly? I was trained to do so since I was knee high to a grasshopper. I thought back to those times where I felt “it.” Each time, a rule had been broken, an expectation defied, a status quo surprised. Annoyingly, Thoreau’s words popped into my head, “We are constantly invited to be who we are… You must live in the present, launch yourself on every wave, find your eternity in each moment.” I took a deep breath, and as I exhaled, I felt something release within me.

It started with a basic head bob, and then my hips started to sway. I felt the rising melody and my hands rose with it, gently conducting and caressing the music. I was no longer dancing with a person or even with myself. I was dancing with the music itself. I began jam out, eyes still closed, forgetting all around me. My foot slipped on a discarded napkin, and my eyes jolted open as I found myself in Lance’s arms. He smiled broadly at me and whispered, “I knew you had it in you.” We danced until dawn, and I had never felt so free. Thanks, Thoreau!

The next day at the audition, I felt a new sensation take over me as I played the familiar pieces. I was more daring with phrases, less conservative with nuances. Clarinets are the ninjas of dynamics, after all. I didn’t know whether or not I would get a scholarship; all I knew was that I had just played better than I had ever in my whole life. I had finally found “it.” 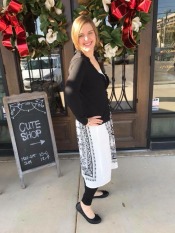 Amy Tagle is a Kodály certified music teacher in San Antonio, Texas. She graduated from Texas State University San Marcos with a major in Music Education and a minor in Medieval and Renaissance Studies. She published an undergraduate honors thesis entitled “Aural Skills Pedagogy: From Academic Research to the Everyday Classroom.” Amy has a deep passion for the written word and is pursuing her dream of writing. This is her first published fiction piece.