At risen angles my furniture sits
each chair fills with blood
with a pulse that could strike, may cease.
Blue couch slants toward vibration
my black arms embracing, hold on
for the dark clots of bass hammering
initials into the air—

After a gig there is a party.
The musician leaves his set in the back
of the truck outside the gate
which locks things in. It unnerves him
to know that all he owns
expressing all he knows lies
on the other side of safety.
The other musicians see his face
in their bellies, make room
inside the gated space for his boat too.

I wish to lean into the labyrinth
of overfilled rests and still know the solid
tracks as one large Atlantic,
the journey without always, but always
I am holding too tightly
to the dippy trills or sanguine
arpeggios those only things
I recognize.

Someone once said jazz
is a generous thief—

She’s named the baby Coltrane and feeds
him Getz and Gaye for lunch. In the morning
I have heard Satie parting things into
Monk for dinner.

Sticks pick up food.
Beat the rat under the sink.

I watch from my couch that now cowers
over the music waiting to get in. He crawls
to me with ease and has been inside the sound
while sleeping which is something I probably did
at his age too, but what is simple anymore?

The drummer wants so much to be
like the painter with product
red brow green lips
but he is not a painter, or is he
reincarnated
to continue along the same lines
no bid before his death?

I have been doing this, I am here, I will stay
on this bluelongcouch
pummel in-between
the notes
that catch in my net
and stave a hunger. 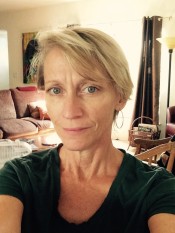 Gannon Daniels is an adjunct English instructor at Glendale College and La Mission College. Her poetry has been published in several journals over the years; including RATTLE, Cimarron Review, Sanskrit, and Drunk Monkeys. She hopes to publish her second book of poems in 2018. Her first book is entitled The Occupying Water.

5 comments on ““Blue Note” — a poem by Gannon Daniels”