J. Lee Strickland of Gloversville, New York is the winner of the 44th Jerry Jazz Musician New Short Fiction Award, announced and published for the first time on March 4, 2017. 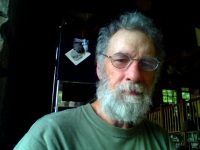 Lee Strickland is a freelance writer and musician living in upstate New York. In addition to fiction and poetry, he has written on the subjects of rural living, modern homesteading and voluntary simplicity. His work has appeared or is forthcoming in Sixfold, Atticus Review, Mad Scientist Journal, Latchkey Tales, Scarlet Leaf Review, Workers Write!, Pure Slush, Small Farm Journal, and others. He served as a judge for the 2015 and 2016 storySouth Million Writers Awards. He is at work on a collection of connected short stories vaguely similar in format to the long-defunct American television series ‘Naked City’ — but without the salacious title.

‘After me comes a man who ranks before me, because he was before me.’ John 1:30

I wake up when the door opens. Instant-awake, alert. I’m staring at the ceiling, at the ornate medallion in its center. Late-night city glow from the windows casts awkward shadows on the plaster. The light clicks on, and I hear a gasp. I feel a sympathetic shot of adrenaline hit my chest. I look toward the door, and there’s a woman there, a stranger. A beauty, too, dressed in a black pants-suit, purse slung over a shoulder, the jacket cut and fitted to her slim waist matador-style. Beneath the jacket, she’s wearing a white blouse with an enormous collar that flares out over her shoulders and breast, like gull wings. Her hair is loose, brown, shoulder-length, streaked with bits of blonde, her face around her dark eyes a mix of fear and puzzlement.

“Who are you?” she says, her hand still on the light switch. “What are you doing here?” Her voice quivers.

I look around. The ceiling looks like my apartment. The door and the windows are in the right place, but nothing else looks like it belongs to me. I’m sprawled on a couch, but it’s not my couch. I push myself to a sitting position. She backs up against the door, grasping the handle. I can feel the alcohol and uppers still battling just beneath my skin, and something else — that purple gel cap the bass player’s girlfriend handed me. What the hell was that? It’s all pulsing around, but it’s a final skirmish, a long way from the exhilarating high of the evening.

I wipe my eyes even though I’m wide awake. “Jesus, I’m sorry, Miss,” I finally blurt out. “I was partying a bit. Guess I overdid it.”

I’ve done the overdone thing before. Elements of fun I call them: booze, pot, coke, smack, uppers, downers, psychedelics. Get just the right combination of elements of fun and, poof, a bit of your life evaporates.

“I must have wandered into the wrong apartment,” I say as I’m looking some more. The layout is identical to mine, even the old plaster moldings that cap the tops of the walls and frame the doorways.

“I swear it was an accident. I meant no harm. I’m a musician. Just finished a gig down at the Circle.” I reach for the handle of my sax case on the floor beside the couch. “Did you leave your door unlocked or something?”

“I never…” she says, but now her eyes are on the case, her hand no longer on the door handle.

As I’m getting my feet under me she says, “You know how to play that thing?”

I look at her. She’s away from the door. Her arms are crossed in front of her, and she’s looking like she believes me, or like she’s testing me.

I chuckle. “You want to hear something?”

She nods, so I open the case on the coffee table and suck on a reed as I’m putting my axe together. I sit on the edge of the couch and play a ballad, Satin and Silver, a quiet, contemplative piece, because I think it’s late and there might be neighbors, and because it’s a new composition of mine that I’m particularly proud of, and I think mellow might just take some of the edge off a strange situation. I get through it, bringing the tenor in low for a pulsing, heartbeat landing, and we’re just quiet for a minute.

Then she says, “I heard somebody else play that today. He played it better than you.”

“No way.” I shake my head. “I just wrote that two weeks ago. I’ve only played it out once.”

“Here, look,” she says. She pulls a slim, silver rectangle from her purse. It looks like one of those classy cigarette cases women accessorized with in the old film noir movies, but it’s not what you’d expect to see in 1973 New York City. It’s got a black lid and she’s tapping at it, but it doesn’t open. She comes over and sits next to me on the couch and holds the case above my lap, leaning into me a little.

I can’t believe my eyes. The thing is a TV. A little TV that she’s holding in her hand, and it’s in color. The tiny picture is incredible in its detail. I’m looking at this old cat in a wheelchair. He’s bald except for a little fringe of white fuzz, dressed in pajamas and a loose robe. He has a tenor in his hands, same make as mine, looks like, but a lot more age. He starts blowing and he’s playing Satin and Silver. He’s playing it in Ab instead of Bb, and I can see how it makes sense, the notes just falling under his fingers, and I want to grab my sax and feel for myself the way the song was made for that key.

But I don’t. I just listen as the old man plays the song, my song, through to that last long, low, pulsing note. I’m speechless. I feel like I’m lost in some crazy dream. She sets the little TV on the coffee table, lays a hand on my arm and says, “Why don’t you just stay a while.”

Myra held the door as the orderly wheeled the elderly man into the room. She had opened the shades, and morning sunlight streamed in, bouncing off the pastel walls, the neatly made bed, the desk and chairs. The man was bald except for a fringe of white fuzz. He wore pajamas, furry slippers and a loose robe. In his lap he held a large rectangular case of distinctive oxblood leather burnished with use. Myra glanced at the folder she held, but didn’t read it. She preferred the new residents to give her the information they thought was important first. There would be time for the folder later. She loved the old folks she tended, in spite of their infirmities, their complaints, their suffering. They were treasures of experience, and she had learned that they loved it when she acknowledged that.

“I’m Myra.” She extended her hand. “I don’t know if I’ve ever been missed.” Corny, but it got a smile out of him, and his handshake was firm, his eyes bright and focused on her face. “So, are you going to tell me?”

“It’s my saxophone,” he said and slapped the top of the case.

“Do you know how to play it?” she asked.

“I can’t walk anymore, but I can still play my horn.”

He laughed. “Old enough to wish I had taken better care of myself when I was younger.”

“Well, we’re both only getting older. You going to play me a tune?”

“Sure will.” He opened the case, fingers nimble, and put a reed in his mouth as he assembled the saxophone. “I’m gonna play you a tune that’s paid my bills for the last forty-odd years. Hell, it’ll be paying part of your salary. I think you’ll like it.”

Myra leaned against the door frame and pulled out her phone. She set it to video and aimed as the old man started to play.