“Full Moon New Year,” a story by Debora Ewing, was a finalist in our recently concluded 47th Short Fiction Contest.  It is published with the permission of the author.

This is one of those parties I’ve heard about, thrown by people with new money in a house they don’t own; like Hipster Gatsby. This is not to disparage our host: he is a sincere human. When one finds one’s self in a cliché, the moment should be chronicled. I’m sitting on a mausoleum chair in the foyer of an upscale Seattle home with my glass of vodka perched on a music stand, chronicling.

The jazz musicians in the living room are playing “Some Day My Prince Will Come.”

“Oh, good, it’s the Disney segment,” I say to nobody in particular. The drunk woman who earlier complimented my chapeau —  one of those feathered tiaras from the dollar store — thinks the Disney reference is funny.

“This is not a Feminist Anthem,” she declares with mock outrage. “Why does it have to be a prince?”

“I think we need to ask the band,” I continue in earnest. “In fact, I’ll take it up with the flugelhorn player specifically, but after he gives me a ride home.” The drunk woman — pale eyes, paler skin, and furry après-ski boots — suggests possible variations of the lyrics, replacing ‘prince’ with ‘frog’, for example. She tells me she likes frogs and identifies with them. I wonder how this song would play if the prince in the song were Prince. We could funk this.

Somewhere around here is a guy named Ali who sounds like he can speak several languages — maybe Italian and probably Rai (French Arabic). I’d threatened to break his arm if he didn’t try the beef brisket. Thankfully he’d acquiesced and agreed that my advice was good. It’s an excellent brisket. There are blini (which I keep calling Tiny Baby Pancakes) with chicken egg, fish egg and various sauces, and soup shots — small red plastic Solo cups of butternut squash bisque.

A little old black guy wearing excellent wing-tip shoes, a white cable sweater, and a pork-pie hat explains to me that the guitarist, himself, needs a dancer in order to play flamenco because he follows the movements of the dancer with his music. He didn’t bring a flamenco dancer tonight but he liked having a rhythm section jump in behind him when he played “Cielito Lindo,” singing it in English. He tells me this is only the third time he’s played in front of people and he is not joking.

The drunk woman starts singing Steely Dan lyrics to the song being played, which I’m pretty sure is a Herbie Hancock composition. I should find the bottle of vodka and hide in the atrium, or go back to the library.

The library is especially Gatsby:  lit by a sensuous brass chandelier, the dark wood shelves are filled floor to ceiling with books on arctic exploration in English and in Cyrillic. Artifacts are tucked into corners, most notably a pair of sealskin boots. Large canvasses leaning against the shelves make the place feel more mysterious, somehow older, like someone became exhausted in the process of collecting and just left it. Our host explains that he’s renting the house from a man who introduced himself as an Arctic explorer. Further discussion revealed, however, that the man had never been to the Arctic, nor explored anything, and actually had been camping only once. The whole library is an erotic fantasy.

The stacked paintings had been taken down before the party because the art was cold and morose like arctic solitude.  The replacement art, hung with price tags next to each piece, is modern and vibrant multimedia. I’ve been hanging out with the artist, a white-haired African American gentleman who came to Seattle from Texas decades ago. He guides me over to a painting he wants to narrate, one that makes me think of you. It’s called Thought.

He shows me how the central shape, a ring, is something a small child might draw when given a writing implement.

“There is darkness and pervasive light, like our thoughts, and a streak of red which represents maturity of thought. And with maturity,” he explains, “the sphere becomes other things — like the moon.” Thought is cyclical like the universe. I show him some of my work, pictures in my phone. He stops on one of my selfies.

“Wait, let me see that one.” He makes shapes with his fingers, trying to focus on some aspect, while I give back-story to the photo.

“I took that while I was waiting in line at the DMV for the third time, trying to get a Virginia driver’s license.”  I let him crop it the way he wants, and now I have an artist’s vision of me saved in my phone. That’s pretty awesome. I scroll to the photos of fresh produce I’d arranged in the kitchen and show him those.

“I’m pretending I’m gonna paint a still life this year,” I joke. He is encouraging, and says I have a good eye.

“You gotta paint more,” he tells me and then shrugs, “I gotta paint more.” It’s that recurring topic: so easy to advise others with words we can’t heed ourselves, right?

I am glad you didn’t come to this party; the night would have gone differently. I can picture us sneaking out the front door with a bottle and walking around the neighborhood in the full moonlight, judging the cars, the houses, and the people who live in them like a mobile therapy session. That would have been us defending each other from the petty clichés of bourgeoisie at a New Year’s Eve party, and it’s what we do. It isn’t wrong. Understanding is the value of our friendship.  The way it is, though — this party —  is more of a fresh start. I am networking and talking arts, my art. I wouldn’t be so bold if you were here to let me stay in my comfort zone.

The band is packing up and dispersing; I guess I’ll go collect my coat from the party greeter with the freckles and modulated voice. The artist gives me his business card, and I’m to send him a poem I wrote with its accompanying picture. I’m taking away from this crazy party several considerations. Thinking new things, expounding upon but not rehashing the thoughts which didn’t really serve their purpose in 2017: these are excellent lofty goals and they coincide with a round moon, a new year, and treasured if distant friends. 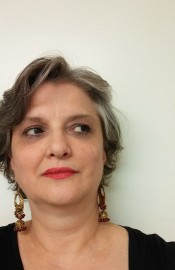 A resident of Annandale, Virginia, Ms. Ewing describes herself as having a restless mind with her highest priority being to “reconcile reality with what should be,”  and likes to write stories about people on the edge.  Her 2002 short story “Coloring Outside the Lines,” was the winner of the first Jerry Jazz Musician Short Fiction Contest.  You can visit her blog by clicking here.